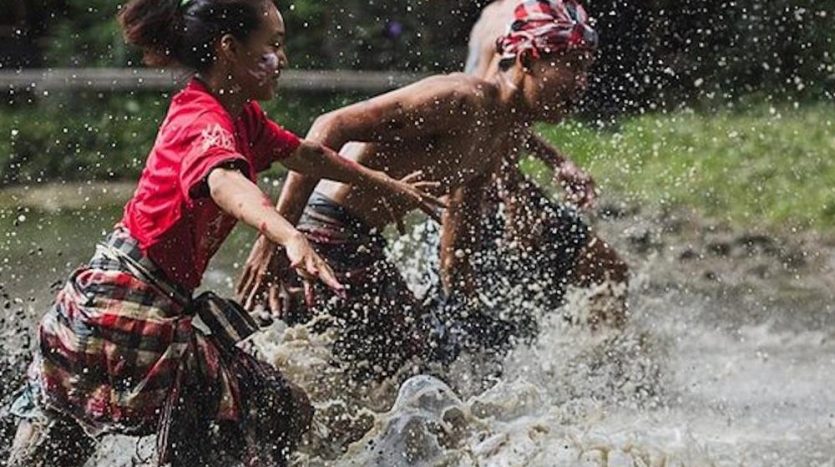 Mepantigan is a form of martial art that combines fight, drama, dance, and gamelan music. It came from a combination of traditional Balinese martial arts like Sitembak, 7 Harian, Depok (usually called Tengklung), with tae kwon do and capoeira. The fighters wear Balinese traditional attire consists of a piece of sarong and headdress called udeng. This show can be held at the beach or any available open areas. In Ubud, they use muddy rice fields as the venue hence this martial art also known as mud wrestling.

The difference of mepantigan compared to other kind of martial arts is that in mepantigan there will be a lot of joint locks and throws. According to Putu Witsen Widjaya, one of the founder and senior Mepantigan master, mepantigan practitioner can evolve as a human being who avoid violence, prioritize empathy and always has respect for the three harmonies; man and man, man and nature, man and gods.

This game consists of 2 fighters and 1 referee, followed by several judges who sit in round formation in the edge of the muddy rice field. One match takes 2 rounds, each round lasted 3 minutes. Although not many people know this kind of martial art, actually mepantigan already took part in world championship in August 2010 together with 6 other countries: Danish, Japan, Korea, Britain, Sweden, and Dutch.

You can watch mepantigan attraction every Thursday evening at Arma Museum Ubud or you can contact Pondok Mepantigan Bali if you are interested to try this activity. It’s fun and safe, for both adult and children.

Mekotek
Ngaben
Sign into your account
Create an account
Reset Password
Register here! Forgot Password? Back to Login Return to Login
A question ? Easily have a chat with us via WhatsApp
Talk with Us
Hello, click on one of our departments to chat via Whatsapp
We will answer you as soon as possible
Rentals
Sales